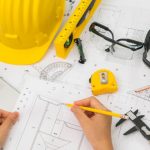 The construction industry began thousands of years ago when humans first began to build shelters for themselves. It was one of the first basic needs that humans had. In addition to being hungry and going out to find food, early humans realized the need to build something to protect their family from bad weather, animals, […]